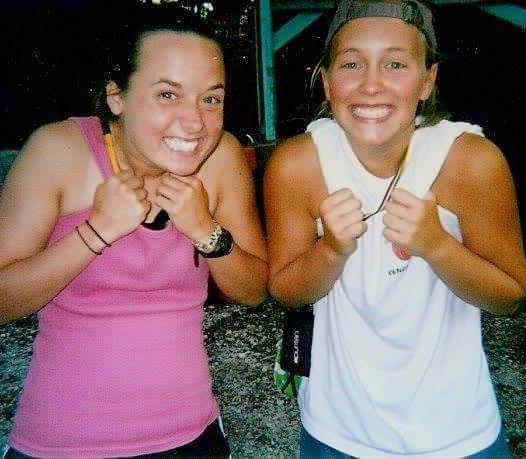 Today would have been Katy Branston’s 30th birthday. In her memory, we are launching a blog mini-series about the sweet moments people remember about her. Our guest blogger today is Hope Montgomery (pictured above on the right), one of the many campers that Katy impacted during her time at Lakeshore.

My most vivid memories of Katy Branston are from floating the Buffalo together one Wednesday while I was a middle school Wilderness camper at Lakeshore.  I can remember Katy successfully belting three different characters’ parts to “The Lion Sleeps Tonight” from the Lion King from the front of the canoe.  It was a feat as impressive as it was funny; Katy was a one-woman show.  Later that day at lunch, I remember Katy sitting cross-legged across from me and another camper, and we’d trade Katy the dough parts of our cookies for the M&Ms in Katy’s.  At the end of that trip, exhausted from a lazy day under the sun and on the river, I would fall asleep on Katy’s shoulder on the bus ride home.

I knew Katy when she was a summer staffer at Lakeshore in the summer of 2006 and 2007. I was a camper for several weeks both of those summers.  Katy taught me to play ultimate frisbee and was my number one pick for my camp basketball team.  Katy was a camper magnet.  I adored Katy, and that was no anomaly.  Katy was outrageously goofy and had a knack for helping kids (and everyone) come out of their shells.  Her joy put other people at ease.  She was a bright light in a room full of people.  To this day, I still think my sense of humor is largely informed by Katy’s.

My contact with Katy didn’t stop after those summers.  Katy became my penpal for a few years following.  I still have her letters in a shoebox in my room.   Later on when she started biking across the country through the Bike & Build program, I would get postcards from her from different stops along the way.  She’d cite the incredible scenery, the miles she’d pedaled, the people she met, and I could imagine what it’d be like to be there with her, soaking in her infectious beams of liveliness and positivity.  I could see her in my mind, probably still belting the Lion King at the top of her lungs for someone.

Katy passed in November of 2016.  It was a blow to everyone who knew her.  I echo the words a close friend of mine wrote to me shortly after Katy’s passing: “Katy was, by far, one of the best people in my life.  My life would not be half as adventurous, exciting, or full of love had she not been a part of it.  It is rare to feel sadness for those who never knew an individual but I truly feel that way.”  That’s a sadness I carry with me now, too.

I work in camping now as a program director at a Methodist camping and retreat center in Oregon.  I catch myself sitting cross-legged in front of campers, making faces or probing the limits of outrageous humor until I can make a homesick camper break and finally smile.  It’s hard not to notice the legacy of Katy I carry with me in the work I do now.  I think of her as I head out onto the field to teach a new group of middle schoolers how to play frisbee; I hope I’m able to carry a bit of the energy that Katy showed to me, that inspires me still to laugh and know how healing that can be.

And now there’s a camper or two that write me letters after camp.  One of them in particular reminds me a bit of myself as a camper.  Writing to her has me thinking about Katy and as I write to her, I imagine Katy many years ago writing to me, who would be just a few years older than the camper I write now.  Katy’s not here anymore to be the light she was to me, the light she was to so many of us.  The camper I write now will never get to know Katy.  But it’s with a lot of pride I carry the bits of Katy I have on to other people.  I’ll carry that light that Katy showed to me.

It’s that same desire for those who didn’t get a chance to meet Katy to experience her love and her spirit that inspired me to donate to the Katy’s Memorial Fund, a fund to build hammock village at Lakeshore.  Katy’s presence alone had the power to be transformatively positive.  So it’s in the spirit of trying to remember Katy by spreading the light she was to each of us on to those who didn’t get to know her directly, that I hope for this hammock village to be built in her memory.  I encourage you to give consider to give, to take part in her legacy, to pass Katy’s light as far as it can reach.