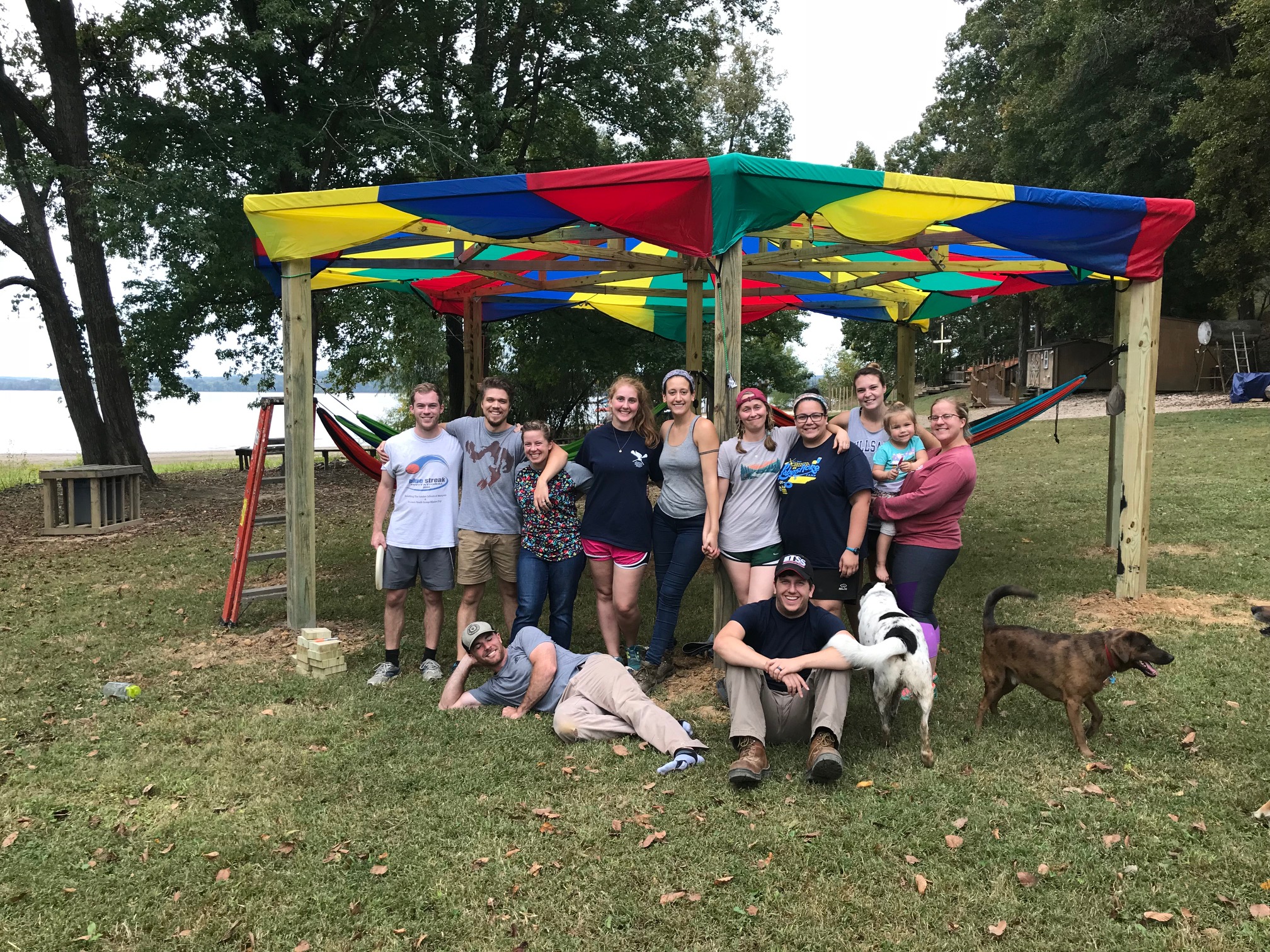 About a month ago, twelve people gathered at the ‘Shore to build a Hammock Village for a dear friend. Katy B was a former summer staff member who passed away all too soon last year.

Katy had a huge personality and a zest for life. She lit up any room she walked into and made things way more fun. She was over-the-top into camp activities and had a way of making a bee line for the campers who felt shy and out of place. She made them feel cool and comfortable and welcome here.

Katy was quick with a joke, goofy facial expression and a big greeting. She would throw her arms around people and talk in a silly voice. She was impossible not to love dearly.

After her time at camp, she did some amazing things. She was passionate about affordable housing and led a team of people who rode their bikes thousands of miles from Maine to California to raise money and awareness for housing through Bike and Build. She worked as the Volunteer Coordinator at Habitat for Humanity in Montana, and I’m sure she was just as good at brightening spirits there as she was here.

She loved adventure and the outdoors and took trips to nearby national parks as often as she could. She spent a lot of time in hammocks.

We felt that the perfect way to remember her was by building a Hammock Village by waterfront. It’s right in between the beach and the soccer field, where she was always playing ultimate frisbee, soccer or socbe, the two-game-one-field combo someone invented years ago.

Twelve of us came to build. Three of us had the joy of serving on staff with her. Three of us were her campers. Three of us were newer summer staff who knew legend of Katy but didn’t know her very well. Two were related to a former staff member and came to support her in this project. One was a volunteer counselor who spent a lot of time around camp during Katy’s years here.

It was a great weekend. It was a very Katy weekend. Everyone helped. Everyone used tools. No one was too inexperienced or too nervous to drill something, saw something, or measure something. Another retreat group saw us working and commented on how many of the women were on ladders using tools, and the men were holding ladders and/or instructing from the ground. Katy would have been proud of that.

The twelve of us didn’t all know each other when we arrived, but learning to build a structure and figuring out how to problem solve on the job are like a low ropes session for total camp bros. We were buds by the end, playing a game of ultimate frisbee in her memory and singing along to Taylor Swift and The Decemberists as Hope Montgomery played guitar. Katy would have been proud of that, too.

We hope the Hammock Village inspires insatiable laughter, cheers for the nearby soccer players, and deep conversations that lead to life-long relationships like Katy was so good at creating. We hope this place becomes a place we can gather and experience in a new way the ministry that happens here.